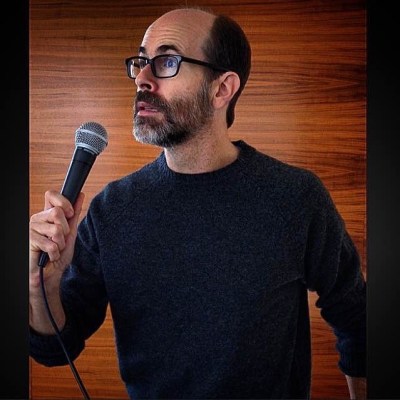 Today I am overjoyed to ask some questions of one of the funniest and most entertaining people on television. Brian Huskey may not be a name that you recognize immediately, but you’ve seen him in numerous movies, television programs, and commercials. Brian has been a staple on Comedy Central and Funny Or Die. He’s been making us laugh for years. Now, Brian has a new series coming out that I am looking forward to seeing. I have seen ads for the show and they are funny.

Beginning this Halloween on TBS, Brian stars with a collection of former Daily Show comedians and other cast members that you’ll recognize on People of Earth, a comedy about a support group for people who encountered alien abduction.

Did growing up in North Carolina mold your comedy?
Absolutely. I think wherever you grow up has an influence on your art, sorry had to get real and deep right out of the gate. But I would say that for some it could be something to react against, but I love NC, and something about that place and the people made me feel able to look at things from the outside, as many folks do with comedy- deconstruct things, question things, satirize etc. But at the same time I had a real feeling of home and safety, and love for all the beautiful quirks of the south.
How did you get to where you are to be on a major new series? Did you do the stand-up circuit or do you prefer improvisation?
I have only tried stand up once or twice, and very half assedly when I did try it. It’s all been improv for me. That was my acting school, and my comedy education. Truly, finding the Upright Citizens Brigade Theater was the most important shift in my life. It is what help set me off on what had been a life long dream, but one that I deferred until I was 28.

And to answer how I got where I am to get on a series, I worked really hard for many, many years and had many disappointments. But over time, my reputation led to more work, and then people became more familiar with me, which I think makes the decision making process easier bc you are a known quantity. Dare I say I became more Starbucks and less Local Coffee Place You Don’t Know So Why Risk It? I know in that analogy I am sort of the evil corporate entity, but remember I am not the consumer in the analogy, the networks are. Networks aren’t known for shopping local so much.
Do you prefer stand up or improve? Where does your comedy come from?
Improv. I prefer to work with other people. I do love doing solo bits, but I don’t think I am disciplined enough to do stand up- working the same joke over and over until it’s perfect, building a set from those jokes. That works perfectly for some people. I’m sure it’s a personality type thing, but I like the discovery of improv- it’s a different kind of comedy high. It’s like a jazz sampler you would find near the checkout of the Starbucks analogy mentioned before.
I saw you play a doctor on Marketing to Doctors: Last Week Tonight with John Oliver (HBO). I laughed so hard that it hurt. Was your performance scripted or improvised? (Brian is the actor playing the doctor at the end of the clip.)
Thank you! Happy to cause pain with my comedy. That was all scripted, But a lot of the script was just action line descriptions of my action, so I messed around there.
Will your new show, People of Earth be scripted or improvised?
It is scripted, but we would always do a take or two where we came up with new lines. I think that is essential in comedy, bc sometimes the writing continues once it’s up on it’s feet. What you thought was a killer scene or bit and then when you do it, it might need that extra tweak or even a different take on the joke. But it always has to be in service of the scene. I think some scripted shows are too rigid about the script, but I also think they trust the actor’s to “write”. One of our directors told me he knew I could write from my improv. That made me happy.

Have you worked with many of these actors and comedians, before?
Da’Vine Randolph, who plays Ivonne, were on ABC’s Selfie last year. Nancy Lenehan, who plays Margaret, used to be on a ABC series called Worst Week and I guested and got to do my scenes with her. I did a kid’s play reading improv show with Oscar Nuñez once.

Do comics hangout with other comics?
Yup. So much so that we refer to noncomics as “civilians”. We are a weird people.
How do you determine what is funny?
I have no idea. Behavior is funny, or it can be.
Were you the original “Sonic guy”?
No, I Pete Grosz and TJ Jagodowski were the original guys. Then they wanted a heterosexual married couple scenario bc some of their fine customers were asking why they had two gay guys selling their burgers? Because apparently in Arkansas where the company started, two guys can’t sit in a non truck car together and not have it look gay.
I would say that you are the “every man” comic. You look mild-mannered but when you speak and act out, the results are hilarious and surprising. Is that accurate? Do you like to shock and surprise?
Oh yes, I do like to shock and surprise. Less so as I have gotten older, but still I love being the package I am, which is very straight, and then having some dark or insane thing come from me is a nice combo. I have a TV special coming out Dec. 2nd on Adult Swim called Mr. Neighbor’s House, and it is just that- very off but in a straight package. It’s a kid’s show that plays in a damaged mind.

Many thanks to Brian and best of luck to him on his new show and upcoming TV special!

I hope everyone enjoyed this interview.